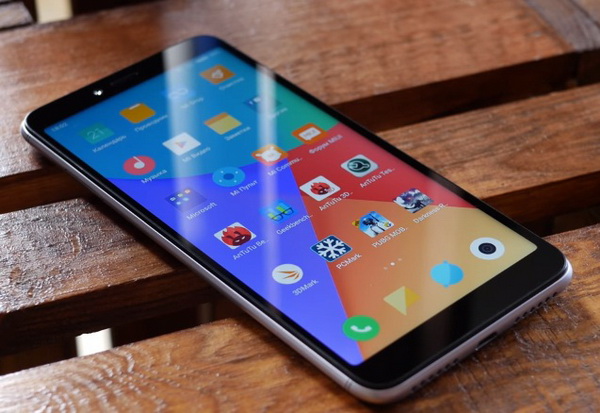 With the release of the mid-range smartphone Redmi Note 5 with Snapdragon 635 processor and artificial intelligence, Xiaomi is not going to stop. The next device from this manufacturer is the Xiaomi Redmi S2 smartphone. It is positioned as the best selfie smartphone in the Xiaomi Redmi lineup.

The front camera features a 16MP resolution and pixel-linking technology, as well as Xiaomi’s beautification mode. The device is intended primarily for young buyers. Especially for those who often communicate on social networks and instant messengers, sharing photos. In China, the cost of a smartphone at the time of the start of sales was $ 165, in Russia it can now be found for 15,000 rubles.

This smartphone can be called an alternative to the Redmi 5 Plus model with a reduced screen resolution and an improved camera. Redmi S2 is available in three color options: gray, gold and rose gold. This review takes a look at a gray smartphone.

The appearance immediately reveals a representative of the budget line Xiaomi Redmi. Glass is used at the front and plastic at the back, the body is monolithic.

The dual camera on the back is vertical.

Since the body is made of plastic, the device weighs only 170 g. It does not look as elegant as the Redmi Note 5 or Redmi 5 Plus with metal bodies. However, the build quality is high, there are no gaps or inaccuracies.

Thanks to its 18: 9 aspect ratio, the device is long and narrow compared to classic 16: 9 smartphones. This makes it easier to hold it in your hand. 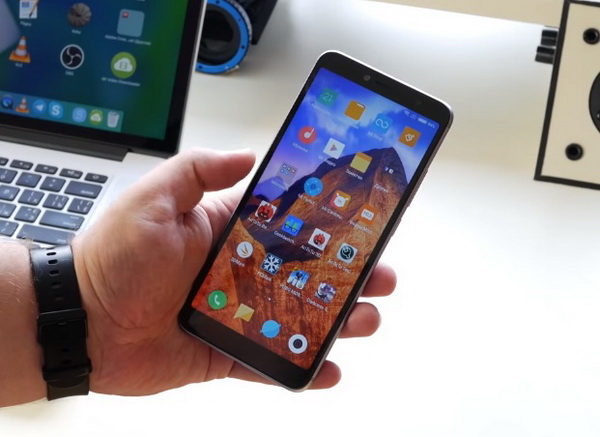 The size of the case is 160 x 77 x 8.1 mm. This is a thin smartphone, so even the large 5.99-inch screen does not interfere with comfortable one-handed operation.

With this screen, the ratio of its size to body size is 74.5 mm. That’s more than the Samsung Galaxy S8 +. There are fairly large frames at the top and bottom, so that the front speakers could well fit here.

Next to the camera in front is the LED flash, indicator light and auricle. Navigation buttons are located on the screen, there are no physical capacitive buttons.

On the left edge is a slot for two SIM cards and a microSD memory card. 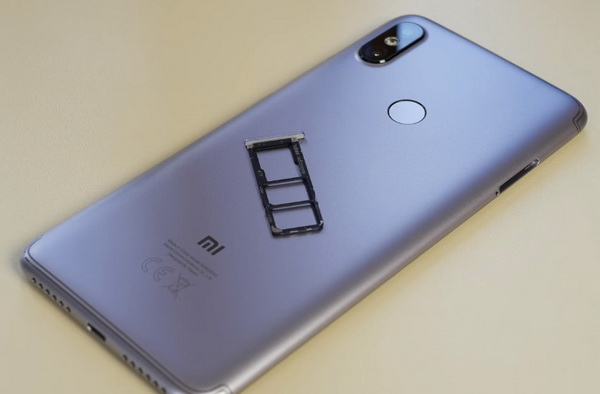 On the right is the power button and volume rocker.

Below, on the sides of the microUSB port, there are six holes. It would seem that these are two speakers, but in fact there is one, and the second is a microphone. 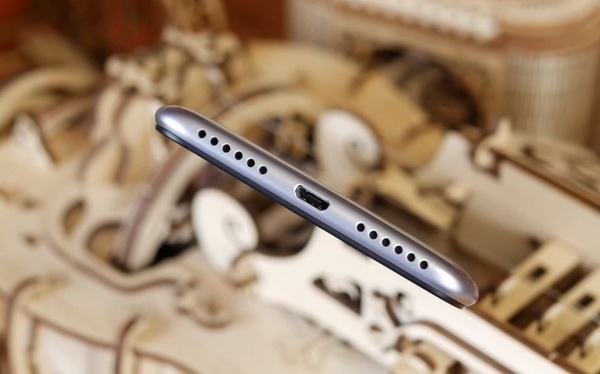 The headphone jack on the upper edge of the device remains in place. There is also an infrared sensor.

On the back are dual cameras, LED flash and fingerprint scanner.

In appearance, the cameras are similar to the iPhone X with a vertical arrangement of modules. We recommend using a case as otherwise these cameras are easily scratched. 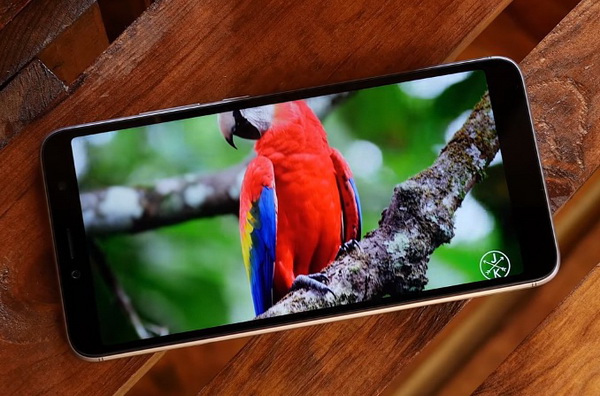 The device cannot compare with modern Full HD panels, but its capabilities are enough to get a clear image. In this price segment, such panels are quite common. This is enough to watch videos and play games normally. There is a reading mode in the settings, which makes it easier to view.

It reduces the amount of blue, which reduces eye strain. You can change the contrast and colors of the screen. 10 touch points are supported.

Xiaomi Redmi S2 works on the well-known Snapdragon 625 processor. The memory capacity is 4 GB, storage is 64 GB (or 3 GB of RAM and 32 GB of ROM). The processor has been familiar for a long time and does not present any surprises, its capabilities for modern applications are sufficient.

This is an 8-core chip based on a 14 nm process technology with 2 GHz ARM Cortex-A53 and Adreno 506 cores. It is not known what prevented the developers from using the Snapdragon 636 here, as in the Redmi Note 5. Perhaps the choice was made to reduce the cost.

Despite the old processor, the speed will not disappoint. In AnTuTu, the device scored 76376 points. For mid-priced smartphones, this is quite a satisfactory value.

To test the gaming capabilities, Asphalt 8 and PUBG Mobile were launched with high graphics settings. PUBG took about 2 minutes to load, Asphalt 8 took 30 to 45 seconds to load. This smartphone will not be bought primarily for the sake of games. Despite this, you can still play.

After 25 minutes of playing, the case temperature was 35 degrees, so it does not heat up much. 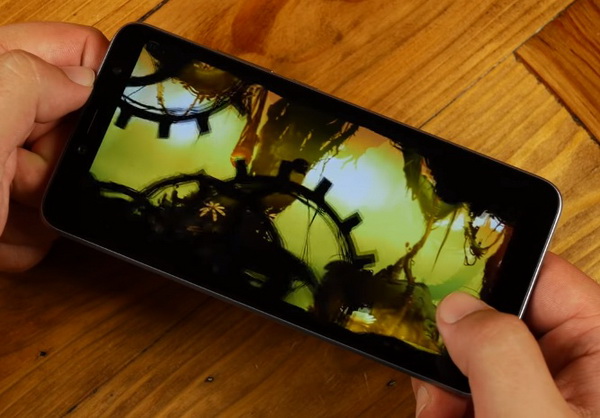 Redmi S2 runs on Android 8.1 with MIUI 9.5 skin. It contains a number of appearance and functionality updates, delivering improved performance over previous versions.

As usual, the device is preinstalled with Google applications such as search, maps, Gmail, YouTube, photos and others. There are programs from Microsoft, Xiaomi itself. Facebook is also preinstalled.

The resolution of the dual rear cameras of the Redmi S2 is 12 and 5 megapixels. The pixel size of the main camera is 1.25 microns, the auxiliary camera is used for shooting portrait photos. 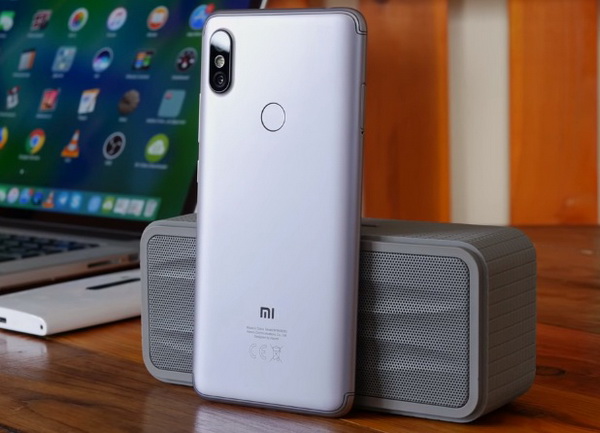 The front camera is 16MP, it supports HDR and 1080p video recording. There is an LED flash nearby. There is a beautification mode that is capable of recognizing makeup and leaving the image intact. Also, the algorithm is optimized for various popular facial expressions when shooting selfies.

When shooting selfies in low light conditions, focusing problems can occur. The flash can sometimes help, but in general it does not greatly affect the situation.

Portrait photography works at a distance of 2-2.5 m to the subject. The results are very good, especially against the background of competitors. Nighttime results aren’t as good, but that’s natural.

Although the camera is dual-camera, it does not support 2x zoom like some other models. There is autofocus, touch-screen focusing, HDR, panoramic shooting, sound activation, manual shooting with settings, face detection and front beautification mode.

You can install two SIM cards, as well as a separate microSD memory card up to 256 GB.

When connected to LTE networks, the speed of the incoming connection reaches 300 Mbps, outgoing 50 Mbps. There is also single-band Wi-Fi b / g / n, Bluetooth 4.2, FM radio and a number of other standards.

For security, there is a fingerprint scanner and face unlock. The scanner works quite quickly and error-free.

The battery capacity is 3080 mAh. Unfortunately, fast charging is not available. There is a power saving function.

It takes about 2 hours and 30 minutes to recharge. If you use the device for watching videos or chatting on social networks, it will last about 16 hours. We can say that it has an average duration of work.

The speakers are loud enough for music playback to be heard in a large room. The sound is clear, making it even more suitable for video and games.

The box contains the Xiaomi Redmi S2 smartphone itself, a microUSB cable, a 5V / 2A charger and a plastic protective case, as well as a user manual. This is a device with an international firmware version, so there are Google services and the Play Store.

The conclusion about this smartphone can be made primarily by its performance. Snapdragon 625 offers good speed, MIUI 9.5 optimizations make it even better. The photographic possibilities did not disappoint either.

The rear camera with an f / 2.2 aperture could have shot better in low light, but selfies and portraits deserve a positive rating.

If there were Wi-Fi ac and USB-C here, the device would be almost perfect.